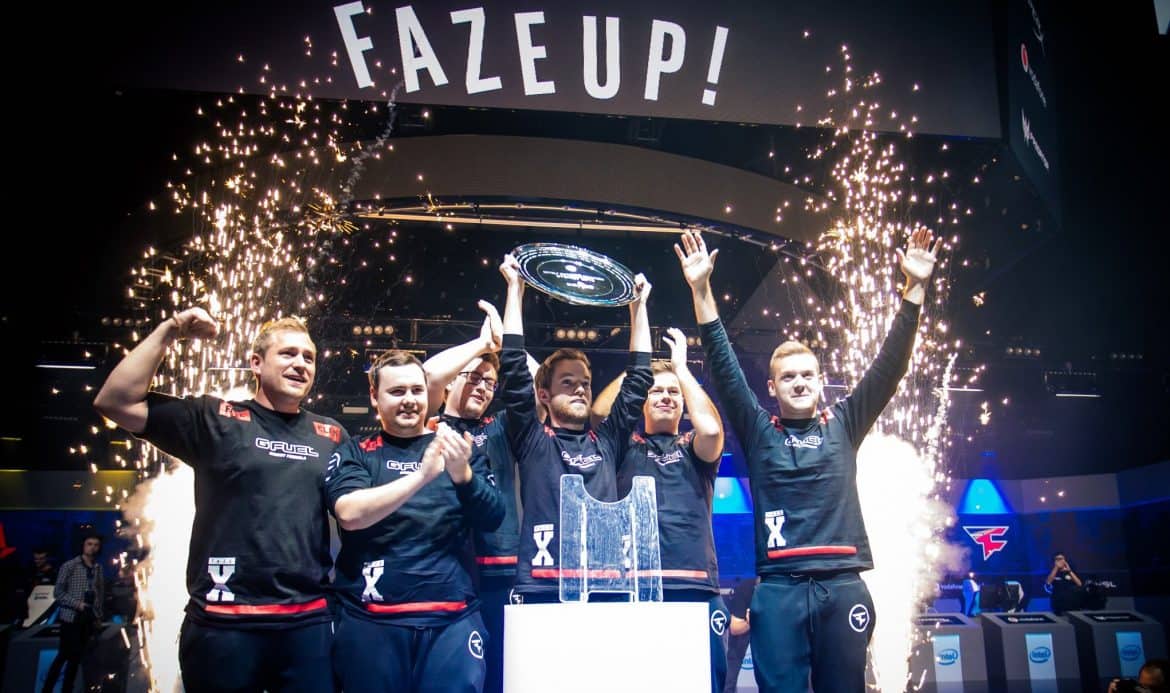 The grand final started with FaZe banning Nuke and Astralis removing Mirage. As a result, the teams were set to play Cache, Overpass, Train, Inferno and a decider on Dust 2.

Cache saw FaZe getting a 10-5 lead on the Terrorist side as they took many of the gun rounds in their favour. However, sensational work from the Danes, including crucial plays by Emil “Magisk” Reif and Andreas “Xyp9x” Hojsleth, enabled them to reach a 15-13 lead.

Still, the mixed European squad was able to bring it to overtime after winning the last two rounds in regulation. After some back-and-forth rounds, FaZe won their pick, 19-17, on the back of a 1v2 by Karrigan.

Going into Overpass, both teams fought bitterly in order to get the upper hand in the second map. However, FaZe got six rounds at the end in order to get another 10-5 advantage, similar to what happened on Cache.

Yet, the Danes clawed their way slowly back into the game and even though FaZe got also a 15-13 lead, they were unable to close it out and the map went into overtime for the second time in the series.

Both teams went on to do two action-packed rounds of overtime before karrigan’s squad finally got Astralis’s pick, 22-20.

The third map on Train saw Astralis get a commanding lead on the defensive side at 11-4. However, once the sides changed, FaZe held Astralis off on the back of high-level performances from everyone on the team, only letting the Danes have three rounds before closing it out at 16-14.

As a result, FaZe wins IEM Sydney, get $100,000 and get one step closer towards winning the Intel Grand Slam. Meanwhile, the Danes took $42,000 and a respectable second place finish.

The road to the finals

Out of 16 teams, only six of them entered the playoffs.

TYLOO went to the semifinals after topping Group A. They defeated SK, Cloud9, and Renegades along the way. Meanwhile, FaZe reached the quarterfinal after beating Grayhound Gaming and Cloud9 in the lower bracket. To close out the group, Renegades got their spot by virtue of finishing in the upper bracket.

As for Group B, Astralis looked hot as they took the top seed in their bracket. Fnatic entered the quarterfinal on the back of their upper bracket gameplay. As for the European side, they needed to win against MVP PK and G2 Esports in order to get their spot.

Astralis won against mousesports in a highly contested semifinal (2-1), thus becoming the first grand finalists of the tournament and dropping only 1 map. As for FaZe, they needed to win against Fnatic (2-0), followed by a win against Asian powerhouse TYLOO (2-1).

A new frontier for Asian CS:GO

Among the Asian teams, B.O.O.T-dream[S]cape, MVP PK, Grayhounds, ORDER, Chiefs, and Legacy were all eliminated in the early stages of the competition.

TYLOO and Renegades were the only teams from the Asia-Pacific region to reach the playoffs. The Australian side was eliminated in the quarterfinals by mousesports, 2-1. Meanwhile, TYLOO ended their run after FaZe defeated them with a similar scoreline in an exciting semi-final series.

All things considered, teams from the Asia-Pacific region showed wonderful performances in the tournament, showing us that increasing spots for lower tier teams can pay off.

The final standings for IEM Sydney 2018 are as follows: