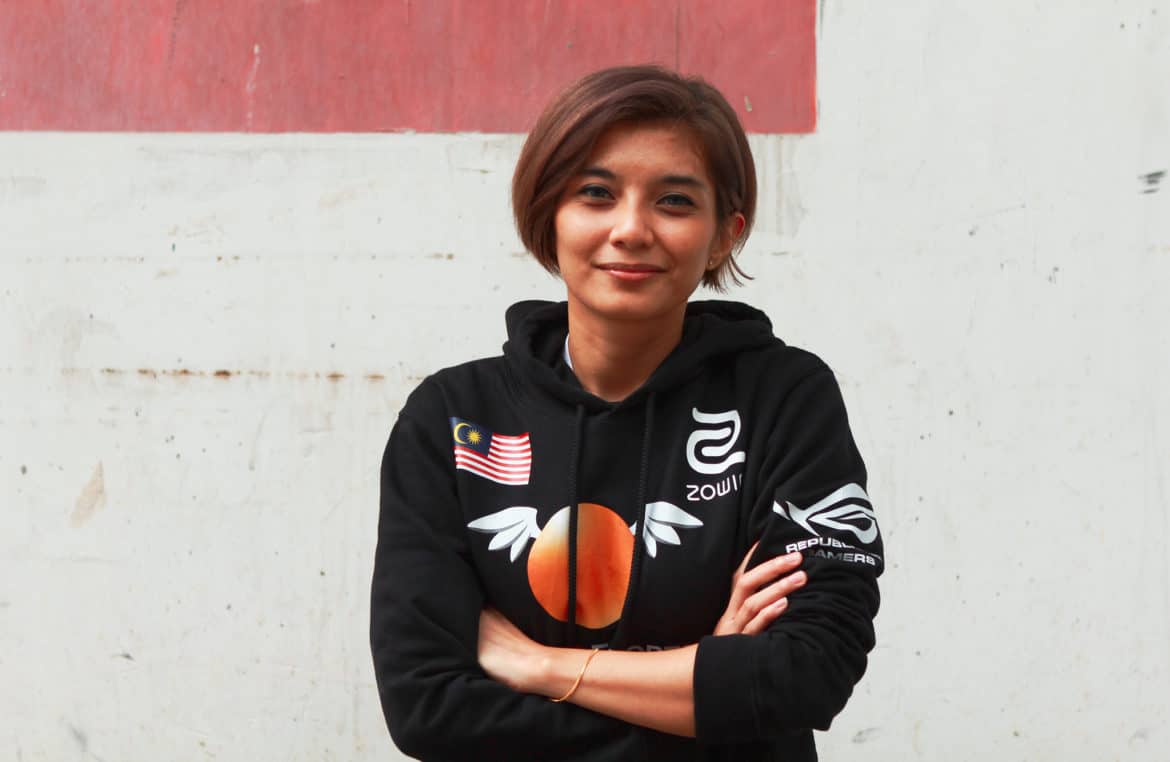 We had a really insightful chat with Malaysian team captain, Ramona “GFi#” Azween, about her years of experience in CS, being a female esports athlete and what she thinks about the perception of esports being male-dominated.

CSGO2ASIA: For our readers that don’t know who you are, tell us a little bit about your background and how you got into CS:GO?

GFi#: I’ve been playing CS for about 15 years now, since CS 1.6! I started playing CS because of my late brother. He got me interested in the game and I just fell in love with it. Back then, there was no such thing as being a female or male competitive player, if you wanted to play competitively, it was just that versus being a casual player. I ventured into the competitive scene playing on a mixed line-up, I was the only girl all along until I met these four girls last year. I’ve been part of Orange Esports in Malaysia since 2012, but last year the girls reached out to me because they needed a last. I thought to myself, why not. I like challenges and seeing them take this challenge on I couldn’t help but see myself as a younger player, wanting to get started but feeling a little lost.

CSGO2ASIA: Right, so you thought to yourself, I have to lead the way or something?

Yeah, but not just about leading the way. For me, every time you enter a sport you have an age to enter and an age to exit. I think I’m at my prime right now, but, I don’t want to look at it that way. I don’t want to just leave the scene and say, “Ok, I’ve had enough.” I think what it really is is that they made me realize that’s it’s time to give back. I decided to stay on as a player and share my experience with them because there’s a lot I’ve learned about the dos and the don’ts, you know? The best part is, they’ve stuck with it. They listen to me and they’ve proven that they are willing to stick it out, to stay motivated and passionate about the game. More importantly, they’ve shown that gender doesn’t matter here, it’s just about always playing your best, doing your best, and that’s the kind of team I want to be with.

CSGO2ASIA: Your team was one of the invited teams for this tournament, did you feel the pressure to perform here and do your country proud?

GFi#: I think all of us did, yeah. Even though I’ve been playing for 15 years, I still felt the chills. Our youngest player is 18, and some of them have only been playing competitively for around 2 years. Coming in as an invited team and going straight to the big stage, yeah, the expectations to perform are there. I just told the team that if you really deserve it, if you feel like you really want to prove something then just come to Shanghai and do your best. At the end of the day, it’s about having fun. Just because you lose it doesn’t mean that suddenly you aren’t a team and when you win your best pals.

CSGO2ASIA: Awesome. So how long has the team been together? What are their different roles?

GFi#: We came together just last year around August as Sphynx, and our first big event was WESG APAC finals. We didn’t have any sponsor or org so it was great that Orange decided to pick us up! In terms of roles, well, I’m the IGL, “3ve;” is the AWPER, Sabrina and Shanice would be the entry/rifler and Jasmine is more of a support player. While the roles are what they are, the team style is more flexible than that. I guess the rest of them do like being told what to do, haha, but I prefer to let them think for themselves a little and be adaptable.

CSGO2ASIA: Tell us a bit about the female CS:GO scene in Malaysia, how many teams are there and what are the opportunities like?

GFi#: It’s coming up. I mean, I have the perspective of back in CS 1.6 days, so back then, there was literally nothing. If you were a girl who wanted to play competitively you had to play with the boys. So, in that sense, it’s an improvement for sure. Locally, we have a lot of female players, but they’re not all serious competitive players. There are probably about two or three active teams and the rest would just form a line-up for a qualifier or something. You definitely see all the familiar faces whenever there’s an event. One of the interesting things I’ve noticed, however, is that as the internet infrastructure and access have improved in my country, I see a lot of females getting into gaming in general. There are so many streamers, Fortnite players, PUBG etc and it’s good, but that doesn’t necessarily mean there are more competitive players. From my point of view, the player base is big now, but there still isn’t really a clear direction or agenda on what to do with this vast player base.

CSGO2ASIA: That makes sense, yeah. So the next few questions are more focused on the topic of women in esports. Do you think that females not just in CS but in esports as a whole are under represented? If so, how, if not, why not?

GFi#: Probably, yeah. I think it’s because most women are afraid to come out of their comfort zone and take on something that is perceived as “male-dominated” like esports. As I mentioned earlier, it’s not that there aren’t enough female gamers! Take, for example, our preparation before this event. Our organization, Orange, hosted a LAN event and we were the only female team there. We ended up winning the whole thing, which was great, but I told my team it’s not just about winning but about being prepared. The biggest takeaway they got from that was that they are definitely capable, and that is the bigger win in my opinion. Most girls would just wait for the ‘female only’ tournament before playing, and that is a mistake I feel. When you wait for something for 1 year, it really is anyone’s tournament to win, so even if you win, you can’t call yourself the best, you know?

CSGO2ASIA: Gotcha. Do you think it is necessary to separate teams/tournaments based on gender?

GFi#: I think, for now, it’s ok. In the future, it would be better to have mixed squads/tournaments. Right now, with tournaments like DIVINA, it’s really good exposure for female esports. It’s the ideal way to showcase the best and most talented women in esports presently, and that is necessary I feel. But moving forward, what does it matter. If for the past 15 years I’ve managed to play as the only female with four other guys, does it matter? I started off like that, not by choice, but because it was the only way to get into competitive CS. I wouldn’t say I did well, but I survived that, and you know what, it wasn’t that bad. So right now, if we can find the most talented female players and they are more than capable to play “with the boys” then they absolutely should. There is nothing to lose from that, and everything to gain. I know I learned so much from that experience and at the end of the day we all have more to gain from combining the two.

CSGO2ASIA: Great insight, thanks. Speaking with some of the other players here, I got the sense that they still feel a bias when looking for practice partners. Particularly, the all-male squads tend to avoid playing with them, do you feel the same?

GFi#: I mean, of course. We don’t even have to talk about practicing other teams, even sometimes if I want to play for fun together with other guys there is a sense that they don’t want to play with us just because we’re girls and they want to save their ELO or whatever. That happens, it’s whatever. There is even harassment like guys will say stuff like “get back in the kitchen” or something stupid like that, but the best part is, if we win then we just yell back “go make me a sandwich now”, hahaha. But what I always tell the girls is that forget gender for a second. If you are there, you practice hard, you show up and put in the hours, you get your individual skill to a certain level then there should be no reason for anyone to not want to play with you. But if you are going to just practice a few hours a week, play one or two games, then it’s not even about you being a girl anymore, is it? Why would anyone want to play with someone who isn’t taking this seriously? Like, If I’m going to go around telling everyone I’m a professional gamer but I don’t act like one, then why would anyone respect me? Why should I expect anyone would respect me. That’s really it, I think.

CSGO2ASIA: Well said. So, how did it feel to play here at ZOWIE DIVINA? What has been your favorite part of the tournament so far?

GFi#: So far I think the practice rooms, especially the gaming table (ZOWIE Zone). It’s just so awesome, you can adjust it exactly to how you want and the rest of the team love it too. The hospitality of the ZOWIE staff and the event, in general, has been really good.

CSGO2ASIA: Finally, any words of encouragement or shoutouts to your fans? What would be the top three things you would recommend to other women who want to pursue their dreams of playing competitive CS or other games?

GFi#: Firstly, don’t care about what people are saying. No matter what, people will talk. Good or bad. Secondly, if you believe in something, then stick with it. Because only you yourself know what’s best for you. If someone tells you that you are bad at something and you stop because of what they said, that person didn’t make you stop, you did! That applies to everything in life. Lastly, I think whatever’s been given to you, it’s best to share. My competitors are competitors in the game and the game alone. But in real life, you should always do your best to care and be there for each other because we are not enemies, especially if everyone has the same dream. Definitely, I need to thank all the people who have been there with us since day one, they know who they are. Without their support, we would have never had this opportunity and it really means a lot. Special shoutout to my mother, she has always been there for me no matter what. And if I could add one last thing to the three things, there is no greater blessing than that of your parents, mother or father.

Jennyyy + Foxyyy – “We’ve only been playing CS:GO for about a year”