And how I brought myself to focus On CSGO2ASIA

I started playing Counter-Strike (CS) in 1999. Back then, it was nothing more than a mod for Half-Life, an awesome game that got me to do naughty 11-year old things like lie to my parents about what I was doing after school and waste all my pocket money on weekend LANs. At the time, a LAN center in Singapore cost something like S$6.00/hour, ludicrous. Also, we couldn’t go there in our school uniforms because the government was catching on to kids who skipped school to play. So we started packing a change of clothes to school. We were pretty hardcore.

Watch: A brief history of Counter-Strike

Needless to say, over the past 18 years I have spent countless hours on, and in, this beloved game. My journey has taken me through all iterations of CS. From 56k dial-up playing CS 1.0–1.5 on the WON network with 300 ping, to Steam and an ADSL broadband connection on CS 1.6. I jumped on the bandwagon of CS:S early and made my mark in the local Singaporean scene with a team called Cube. We did alright locally, and even got sponsored. But it all stopped when I had to serve my country, and as soon as that was done, I left to the U.S for university basically not touching the game between 2007–2010.

At this point, I wrote off this entire period of my life citing youth as a misguided compass to nowhere. It wasn’t very serious, there was a practical side of me that just didn’t buy the fact that competitive CS was ever going to be a “thing”. So I left for University and didn’t look back. My CS days were over.

College was great. After 2-years in the Singapore Army almost entirely void of courteous behavior, and female company, I guess you could say I had other priorities. However, Valve released Steam for MacOS while I was at school, this was the turning point.

I remember asking my parents for a MacBook Pro for college for the very reason that I didn’t trust myself to control my addictive habit to CS. Besides, I knew deep down that I wasn’t going anywhere with this game, with this passion, hobby or whatever you want to label it. What did my parents spend all that money for me to go to school for? What were all those internships and a year spent in China for? Surely, not Counter-Strike.

Fast forward to 2013 when I graduated college, an 11-month job in the U.S, and I found myself back at home in Singapore in late 2014. CS:GO was booming, I was back home and once again had a nice gaming rig. So I did what anyone in my position would do, I started playing CS again!

What was going on around me at the time simply sucked me in. Competitive CS, or rather eSports, was BACK, and with vengeance too. Of course the introduction of matchmaking helped drive a new competitive spirit in me. But what was going on in Asian CS? Not much to be honest. (CS Online, never understood it, never will). We had to wait until late 2015 for Vietnam’s ‘Skyred’ to introduce the World to Ngô ‘CrazyGuy’ Công Anh and his team. 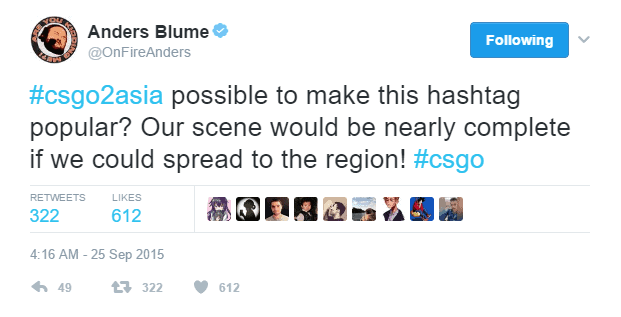 As cliche as it sounds, I woke up one morning and realized that I needed to do something. I couldn’t sit still knowing that this entire World I was once so integrated into was growing all around me and I was not at least partly involved. Moreover, there seemed to be a World of opportunity in Asian CS (especially after the #csgo2asia fiasco), if only we stick with it, go with the flow, train hard and go Pro!

So I started a team. Actually, I helped resurrect a team; made of up a bunch of friends, I proposed that I’d be their manager. They were the players, young talent with a world of promise, and I, with some guidance and wisdom, would take them places. For a brief moment, we did alright. Regionally we were decent enough. Locally, we were probably the number 2 team around.

Over time, however, that is what got to the players. Always falling short. When I really think about it, what did we accomplish? Not that much.

It was inevitable that it all came to an end, I pulled the plug in August 2016.

There were many more reasons for this which I shall not get into, the long story short of it was, partly, due to me not seeing myself achieving what I wanted to achieve by running a South-East Asian CS team at the time. More needed to be done for the entire Asian CS eco-system. I knew this.

While managing a team I came to realize that eSports, and more specifically, CS, is a way of life for me. It actually always has been, this was my calling, and this is what I needed to do. It was partly the reason why I had to leave my team, because unless you surround yourself with like-minded individuals you aren’t going to go where you truly need to go.

This is the story of Counter-Strike in Asia. I know there are many versions of what I went through, albeit, littered with differing nuances. But the point is, the overall narrative is the same. People play this game with hope, they work hard (but not hard enough), they face social pressures and then just stop, because, “what’s the point?”

It really doesn’t have to be this way.

That is why I started CSGO2ASIA.