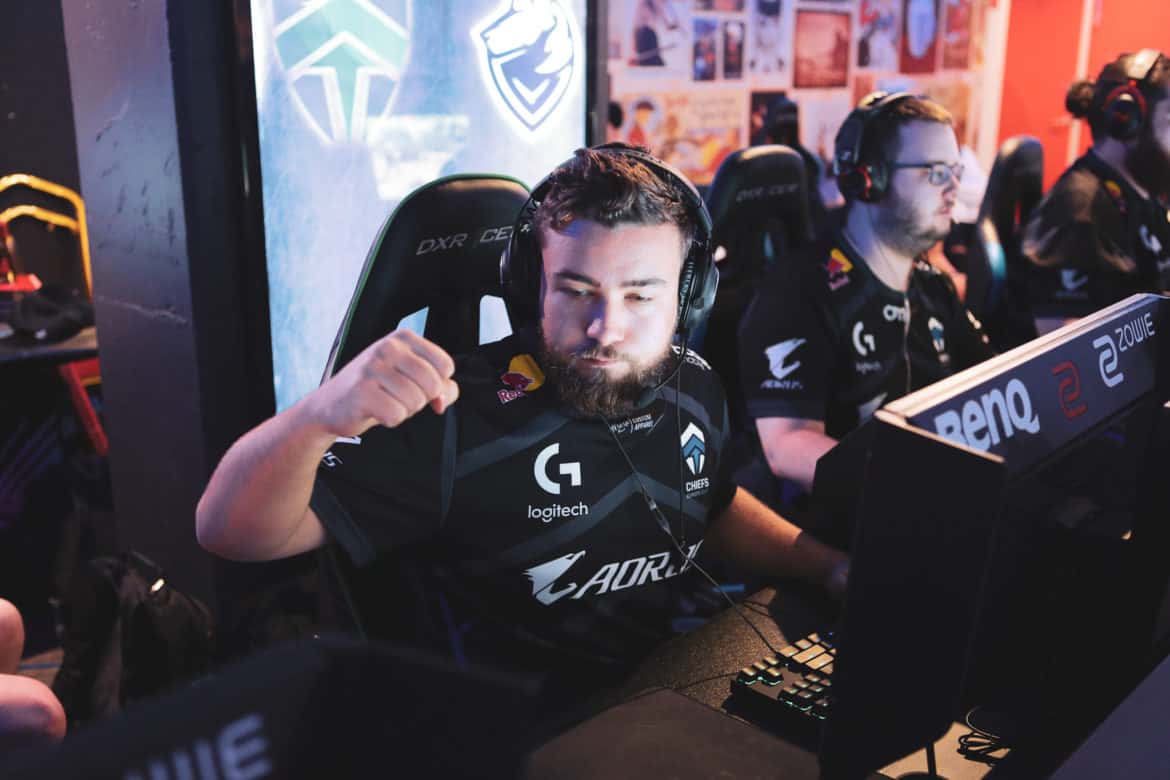 Over the weekend, we sat down with Chiefs member Tyler “tucks” Reilly and had a chat about the team’s new direction, the rise of the Oceanic scene and issues around the saturation of CS:GO events in the region.

CSGO2ASIA: It’s been a while since we last spoke. How’s the past year been for you, both personally and with the team?

Tucks: Good and bad, it’s been a big year for me personally even outside of CS. I wouldn’t say we’ve had the best results, but you know, we’re finding ourselves a little bit and hopefully, we’ll end the year a bit stronger.

CSGO2ASIA: And so what’s the latest with Chiefs, we saw that after your short stint with Tainted Minds the organization was acquired and the parent company Icon Creative acquired Chiefs too. So what has changed if it all?

Tucks: Nothing really. The Chiefs brand was acquired by Tainted Minds (TM) and then Icon Creative acquired the TM brand, and now basically we’re operating under Chiefs. I played for like only a month with TM and we basically just combined the rosters so nothing much has changed there.

CSGO2ASIA: Back to the shuffle earlier this year when Gratisfaction and Liazz were picked up by Renegades. How did that shuffle affect the scene in general, do you feel? Was it mostly positive or were there negative impacts too?

Tucks: Well I mean, Renegades is a proper contender, which is pretty cool, and that’s pretty awesome especially for Gratisfaction and Liazz. I don’t really think it affected anything that much. I mean, TM sort of died, because we took ofnu and zewsy, Grayhound could even argue that they got stronger, they’ve been putting up better results. ORDER also got stronger now, and I guess you could say things have sort of come back to being the same, you know, it’s just the top four and everyone else. Grayhound is the best team here and I would say ORDER is the second-best because they’ve been beating us quite a bit recently.

CSGO2ASIA: So, it’s mostly positive then? I mean, do you not feel that now that Renegades have confirmed their ‘Legends’ status not only once but twice, that it has inspired the scene here to achieve more, or is it more just like “oh ok, good for them”?

Tucks: Yeah, I mean, it’s positive because Renegades got better. But it’s just good for them because they’re good players so yeah, it’s good for them.

CSGO2ASIA: Would you say that in a way, the Oceanic scene is primed to be a talent farm for the wider CS:GO scene abroad, specifically for teams in NA?

Tucks: I feel like it should’ve already been a talent farm a while ago. I mean you’ve seen Renegades doing well for a while now. And now we have Grayhound doing well when they play abroad so it’s a good sign. I thought NA teams would be picking up Aussie players a lot more than they are, to be honest. But hopefully, we’ll see that sooner, and not just individual players but full rosters. I think a team like Grayhound could go over there [North America] and do really well.

CSGO2ASIA: What about the level of competition locally? Chiefs have always been a team, regardless of its line-up, that has remained at the top in Oceania. How do you think a team like Grayhound plays differently, from what you see in the server, now that they have international experience?

Tucks: I don’t know, I feel like they’ve played the same as the whole time I’ve played against them. They probably just play a lot more confident after their recent results, they’re more confident in themselves. And they’ve had a lot of European boot camps and whatnot, especially this year, so that’s definitely been a massive help. Individually they’ve all improved and just make smarter decisions, and at the macro level, well I guess they just play good Counter-Strike really, it doesn’t feel like it’s any massive change or anything, they’re all good players.

CSGO2ASIA: And on that topic about local competition a little more. Chiefs have had an impressive run in the MDL Season 32 so far, only losing to Genuine at the time of writing this. Teams like Genuine have seemingly come out of nowhere. Tell us a little more about how you think this team has managed to rise so quickly and how players have developed in your region over 2019?

Tucks: Well for Genuine, their players have been around for a while, right. I guess they’ve just not been on the same team for long enough, etc. Sometimes they play really well, like a proper team, but sometimes they just play bad. It’s probably a question of just being inexperienced right. I mean they’ve definitely impressed because they’ve achieved all this without anyone showing them the ropes, but yeah, they’re still very inconsistent.

CSGO2ASIA: So you wouldn’t really see them as a threat then?

Tucks: Um, no not really. But you would still treat them with respect of course, and expect that they could put up a challenge but you wouldn’t expect them to beat you really.

CSGO2ASIA: Every region struggles with finding IGLs. Do you see the same still happening in Oceania? From the outside, it looks like there are some potential candidates, like J1rah on AVANT and ofnu rising to the challenge for Chiefs, but we’re curious about your thoughts on this?

Tucks: I mean being an IGL is just a hard role, right. So it’s obvious why people just don’t wanna do it, it’s incredibly hard, there’s so much responsibility. To be able to lead and do all the work inside the server, that’s tough. But yeah, J1rah’s been a good IGL, he’s still up and coming but he seems promising, and ofnu too. In my opinion, he’s a great in-game leader, he’s only been doing it for a couple of weeks now, but he’s extremely good at it. Ofnu has a great IQ for the game and thinks of it on a very high level. Obviously dexter’s really good too, and emagine has been doing it for a while too so it’s good to see those guys still at it. You know for us, having BL1TZ as the IGL, it was just tough for him to balance that with being the main AWPer too, so we’re happy that ofnu is giving it a try.

CSGO2ASIA: And you’ve had experience in that role too. Do you ever lend your experience and try to help out, or is it more just letting them do their thing?

CSGO2ASIA: Is there ever any talk about bringing in other talents from Asia to Australia? Or is it a non-discussion because of logistics/language barriers?

Tucks: Sometimes there have been conversations, but logistically it is a challenge. I think, in terms of salaries, especially the good players in Asia, they’re a lot higher than what we get here in Australia. Also, no one really has a gaming house apart from Grayhound, and even if we did it’s still a challenge right. I mean, we would if we could.

CSGO2ASIA: Gotcha. So, on to the eXTREMESLAND Oceania qualifier. Your first game against Grayhound started off well on Mirage, and you remained unbeaten on that map for the past 3 months. However, on day two, you lost the game to ORDER on your seemingly strongest map. Walk us through what you feel was the problem?

Tucks: Well ofnu just started IGL’ing like two weeks ago, we haven’t much time to prepare. We have some basic stuff, and a lot of it very fast-paced, especially on Mirage right, it’s very fast-paced especially in the early rounds. I think ORDER were also just prepared for the fast pace of it, and that’s pretty much it. We lost every pistol I think, so that was really hard. They’re playing really well together, and Valiance is playing really well. We also didn’t have anything slower-paced prepared so that was a big part of it. We know what we need to work on now so that’s the main thing, and we’ll just go back to the drawing board and prepare for next week’s LAN in New Zealand.

CSGO2ASIA: The talk of this weekend was the clash of ESL Pro League S10 vs the eXTREMESLAND final in Shanghai. From a player’s perspective, try and walk us through how the decision is made to choose one event over another?

Tucks: I think it’s really shitty that the players have been put in this position, really. It’s actually quite ridiculous. I do understand these things happen, but it still sucks. I mean, all the four teams attending this LAN are also in the ESL Pro League stage two, so I assume they all feel like they could qualify for the Pro League finals, so they’ll probably choose that. Going to Denmark and being to play there and potentially boot camp in Europe for a while, you don’t get that chance often. We don’t really care about money. I mean, the eXTREMESLAND event is also really great, I personally haven’t been, but I’ve heard from the other players that it’s good, so yeah.

CSGO2ASIA: Understanding the point of view of the redundancy to play a final game because the top two teams are guaranteed qualification, don’t you think it’s not good sportsmanship to forfeit a game just because there is “no point”?

CSGO2ASIA: What are your goals now and what were some of the key takeaways from this LAN?

Tucks: Our goals are just to refine our T and CT side really, keep playing and improving. We’re progressing really well, I’m really happy with it. Our big goal is to win the Pro League qualifier, and obviously the OMEN Challenger ANZ qualifier is a big one in New Zealand next week. So we’ve just got to focus on what we want with our CT side and such, but we feel confident that we can get there.

READ HERE: PAZ – “IT’S NOT ABOUT THE TALENT [IN THIS REGION], IT’S THE MENTALITY.”