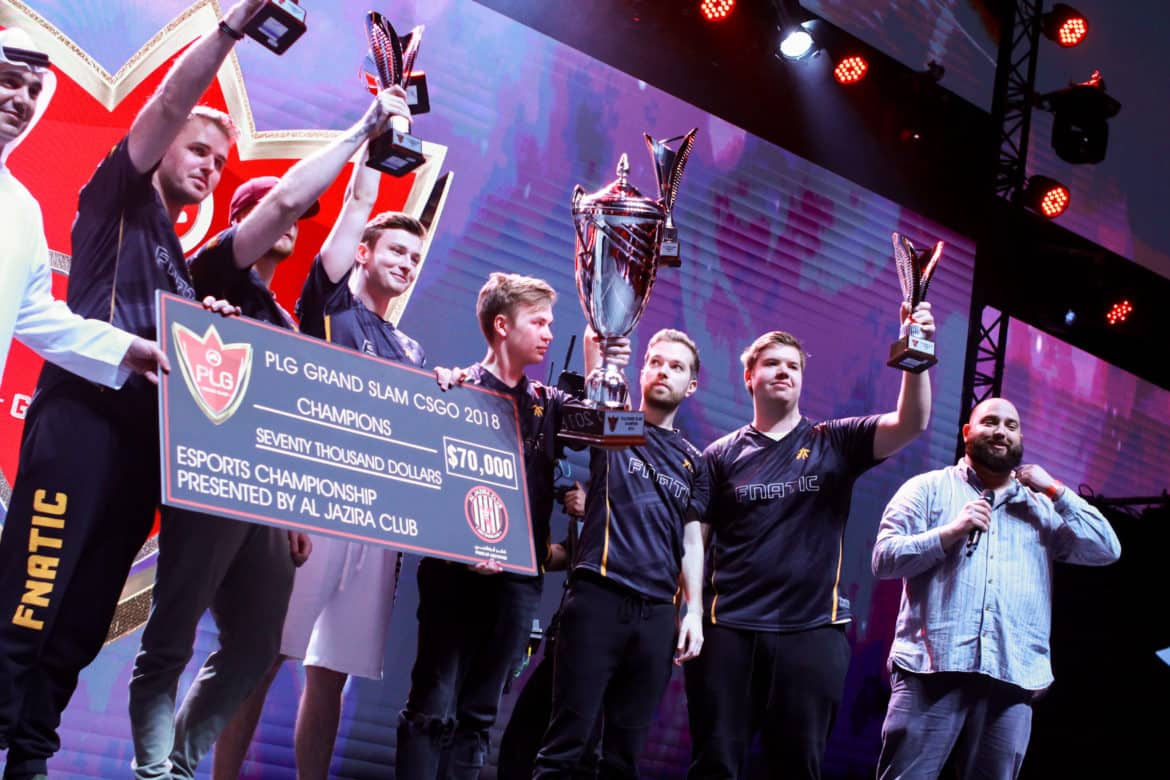 Day 3 of the PLG Grand Slam 2018 saw the remaining four teams compete (for the first time in the tournament) on-stage, for the US$100,000 prize. While the PLG production crew experienced delays once again, today’s delays were nothing out of the ordinary, unlike the previous two days.

The first PLG semi-final was scheduled to start at 2 PM (UTC+4) but was pushed back due to networking issues, setting the tournament back by around an hour. With BO3 series going the full distance and smaller technical issues adding to the already troubled tournament, matches ran late into the night.

Still, credit must be given where credit is due, and even though we only got to see the semi-finals and grand finals played on stage with all the production elements in place, it definitely was worthwhile. Members of the Emirati Royal family were even in attendance at the du Forum, bringing an entourage of enthusiastic fans along with them. It’s a pity the technical issues and production problems weren’t fixed earlier – viewers at home had no context to the proceedings of the event which truly had the right idea in mind, but lacked a proper execution overall.

Sharks started strongly, winning the pistol round with some nice one-taps. They followed it up by winning the second round, as well as the first gun round by running down the time. Lucas “Lucky” Chastang finally got G2 on the board in round 5, winning a 1v3 to make it 4-1 for Sharks. The Brazilians fired back, immediately resetting G2 in the next round, pulling ahead to a score of 9-1 thanks to Renato “nak” Nakano putting the B site on lockdown in round 10. Sharks eventually finished the half 12-3, and while G2 won the pistol round with a nice double kill from Lucas “Lucky” Chastang, it was too little too late, with Sharks closing their map pick 16-6.

After a big loss on the first map, G2 started strong by winning the first pistol round. They converted the second round as well, but Sharks managed to kill 4, with Leonardo “leo_druNky” Oliveira even getting a knife kill. With some extra money in the bank, Sharks managed to win both round 3 and 4 to make it 2-2. The Frenchmen, who were not amused, responded by stringing together 10 rounds with Kenny “kennyS” Schrub winning a crucial 1v2 clutch in round 8. Going into the last round of the first half it was 12-2 for G2. Sharks clinched the last round by catching G2 off guard with some aggressive pushes. However, as on Train, it was too little too late, and G2 closed the game out 16-4.

While Train and Dust 2 were both one-sided affairs, Nuke was a complete nightmare for the Brazilians. Fresh off a win on the second map, G2 brought their confidence game on the opening round. Starting Nuke off strong, they that momentum throughout the entire map, barely giving Sharks any chances. After taking the first half 15-0, Sharks had little left in them to make any impact, and G2 ran away with the map 16-0, closing out the series 2-1.

forZe were fast out of the starting blocks, winning the pistol round and the six rounds after to get a 7-0 lead. Only in round 8 were fnatic able to get a  round on the board, although they were reset right after in round 9, allowing forZe to increase their lead to 9-1. After that, however, fnatic won out the rest of the rounds to make it a 9-6 half for the Russians. The second half saw forZe winning the pistol round, and taking the 3 rounds after that to make it 13-6.

The Swedes’ experience definitely shone through though, remaining calm and collected as they began their comeback from being 6-13 down, steadily making their way to only a 1 round deficit, 13-14. However, Bogdan “xsepower” Chernikov stood his ground in round 28, pulling off a massive 1v3 clutch to push forZe on to match point. Nevertheless, fnatic immediately responded, resetting forZe by shutting down their B execute. This left forZe’s economy in shambles going into the last round, leaving them no choice but to force. Even though they had inferior weapons, the Russians managed to squeeze by thanks to Almaz “almazer” Asadullin clutching a 1v2 to steal the map away, 16-14.

Overpass was a much more one-sided map, with forZe not able to keep up, even though it was their map pick. The Swedish side started the map on the front foot, winning the pistol and converting the round after. The boys from forZe secured the first gun round, but were reset in round 4 to make it 3-1, allowing them to snowball ahead to 7-1 before forZe could fire back with of their own. Otherwise, fnatic dominated the first half, with a score of 13-2, and ended the game 16-4.

The series’ deciding map was Inferno, and it was by far the best game of the tournament. Not only was regulation time back and forth, constantly trading out rounds, but the map also went into overtime. In the first half of OT 1 fnatic went up 18-15 and it seemed like all hope was lost for the Russian side, but Dmitriy “” Alekseyev dived in to save the day with 4 kills from balcony to stop fnatic’s A push. Even in the next round when Jesper “JW” Wecksell got the opening pick in mid, forZe kept their cool to close out the round, making it 17-18, even though they started the round a man down.

With fnatic’s money low in the last round of OT, forZe didn’t have much trouble tying it up 18-18. In the second OT, fnatic managed to get another perfect first half, making it 21-18. So, it was once again do-or-die for forZe who kept cool under the pressure. Even when Jenya “FL1T” Lebedev jumped out of Apps and killed himself in round 5 of OT 2, Bogdan “” Chernikov saved the day in a 1v1 against Freddy “KRIMZ” Johansson while the whole audience held their breath. The two sides battled it out in what seemed like a never-ending series, but eventually, fnatic prevailed and booked their spot in the grand final, winning 25-23.

The Swedes continued their momentum into the grand final, winning the pistol round and getting the 1-0 head start. G2’s Alexandre “bodyy” Pianaro struck back in the second round with his P250, catching both Jesper “JW” Wecksell and Simon “twist” Eliasson off to equalize it 1-1, and allowing G2 to pull ahead 3-1 before fnatic could recover. fnatic responded in round 5, successfully retaking the A site. The rest of the half was back and forth, finishing 8-7 in G2’s favor. The second half saw fnatic bounce back, taking both the pistol round and the gun round, tipping the scales in their favor with a scoreline of 11-8. While G2 stole back a few rounds, fnatic ultimately took Dust 2 quite confidently, winning it 16-11.

While Dust 2 wasn’t one-sided, fnatic were always in the driving seat. On Mirage, G2 won an almost perfect CT-side pistol round on Mirage, losing only one player to fnatic’s attack, but a huge play by Freddy “KRIMZ” Johansson getting three kills with the hero AK the following round tied it up, 1-1. fnatic then took the early lead, winning five in a row before G2 could get back on the board. Both teams then traded rounds, making it 7-3 for the Swedes. With a broken economy, G2 saw the half quickly go downhill, going behind 5-10 before the switch.

The second pistol rounds went the way of G2, who were able to gain some hope after winning the anti-eco, but a solid hold on the first gun round kept fnatic ahead. The French side didn’t give up, though, and took the two following rounds, making it 9-11, but a huge defense on A by KRIMZ with a double on a late round 3vs3 kept the swedes in the driver’s seat. Once again, though, G2 managed to weasel their way back into the match, winning round after round to take the lead back, 13-12, with fnatic’s economy in shambles. The Swedes, with their backs against the wall, were able to come back from 12-14 to turn it around to 15-14 ahead of the last round. They then cemented their 2-0 victory in regulation time, 16-14, to be crowned champions in Abu Dhabi.

The final standings at the PLG Grand Slam 2018 are as follows:

Check out our daily recaps :

Check out our interviews from the event:

🇮🇩 XCCURATE – “WE NEED TO CHANGE THINGS AROUND AFTER EACH TOURNAMENT…

🇦🇪 BREAKER – “OUR GOAL IS TO MAKE IT TO THE PLAYOFFS”

🇸🇬 ALECKS – “I BELIEVE YOU REALLY NEED A TEAM OF SUPPORT STAFF FOR THIS TO WORK.”

For the biggest news & insights on the Asian CS scene, be sure to scroll down and subscribe to our newsletter.